Frank Lampard has enjoyed some famous victories alongside Jose Mourinho over the years, but few can have tasted as sweet as this on a night of drama at Old Trafford.

As goalkeeper Scott Carson lunged to his left to smother Phil Jones’ weak penalty, Lampard pumped his arms in jubilation on the touchline. This was the finest moment of his fledgling managerial career and a well deserved one at that.

Yards away, Mourinho hung his head and contemplated the latest setback of an increasingly dismal season. 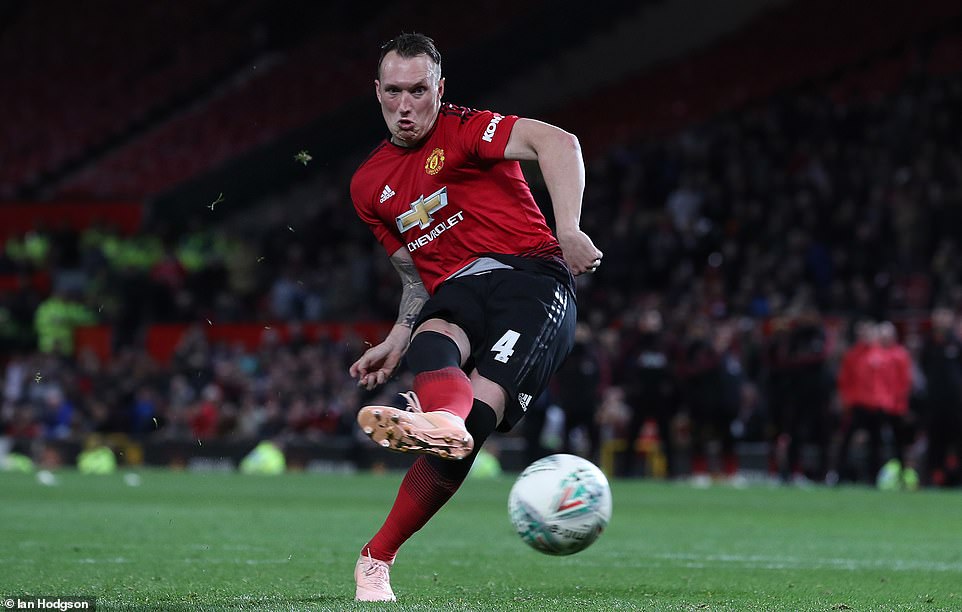 Eight points adrift in the Premier League, Manchester United are now out of the Carabao Cup at the first hurdle as well.

Up in the stands, Paul Pogba tried to hide under a white hoodie as the drama unfolded. Rested for the night amid renewed uncertainty over his future at United, would Pogba have made a difference?

Possibly but Mourinho had enough big guns on the pitch to get the job done against Championship opposition, and once again they came up short.

United thought they had salvaged this third round tie when Marouane Fellaini headed home deep into injury-time after Derby took the lead against a team reduced to 10-men by Sergio Romero’s sending-off.

But with extra-time no longer required in this competition, and the two teams level in the shootout after scoring each of their first seven attempts, Andy Keogh converted for Derby and Jones failed for United.

It was the fifth time in a row that United have lost a penalty shootout. 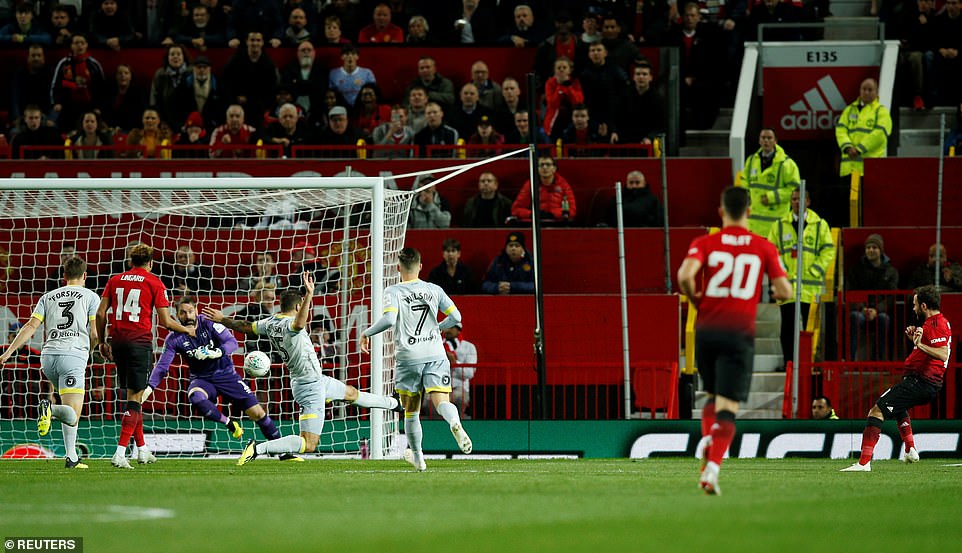 Lampard led his players over to the corner of the pitch where their fans were celebrating and milked the moment. They had deserved it.

That had appeared an unlikely prospect, however, when Juan Mata fired United ahead inside three minutes.

It came from a sweeping move beginning down the left where Anthony Martial took the ball down with a fine touch and played it across goal.

Romelu Lukaku tricked the Derby defence with a clever stepover and Jesse Lingard fed a pass to Mata who swept a shot beyond Carson.

The Spaniard had another great chance shortly afterwards when he controlled Ashley Young’s long pass and but was denied by Carson at close-range, and Lukaku twice went close to scoring before the break.

Derby had been lively on the ball up to that point but their best effort came from Mason Bennett who was denied by Romero at the far post.

They emerged in even more purposeful mood for the second half and Harry Wilson had already seen Romero parry one effort agonisingly round the post when he equalised with a stunning free-kick after Young was penalised for a foul on the hour mark. 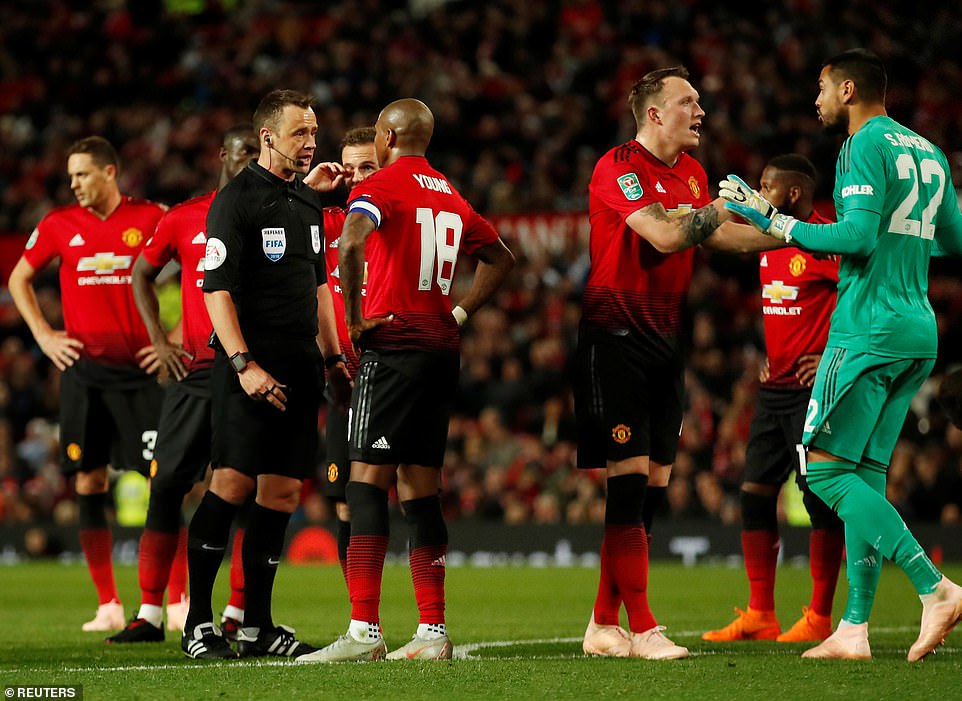 The youngster on loan from Liverpool put his hand up to take it and sized up a shot from 30 yards.

It was one of those deliveries where the ball hardly turns in the air but swerves viciously. Unfortunately for Romero, it bent away from him and the Argentina international stood motionless as it arrowed into the top corner.

Suddenly United were on the ropes, and they were dealt another blow in the 67th minute when Romero was sent off.

Referee Stuart Attwell had little choice but to show a straight red card as Wilson chased a throughball from David Nugent and touched it past the keeper as he raced out of his goal.

Romero instinctively stuck out his left arm to block the ball and knew immediately what he had done.

‘There’s only one Lee Grant,’ sang the Derby fans as their former keeper came on as United’s replacement with the prospect of facing a shootout. 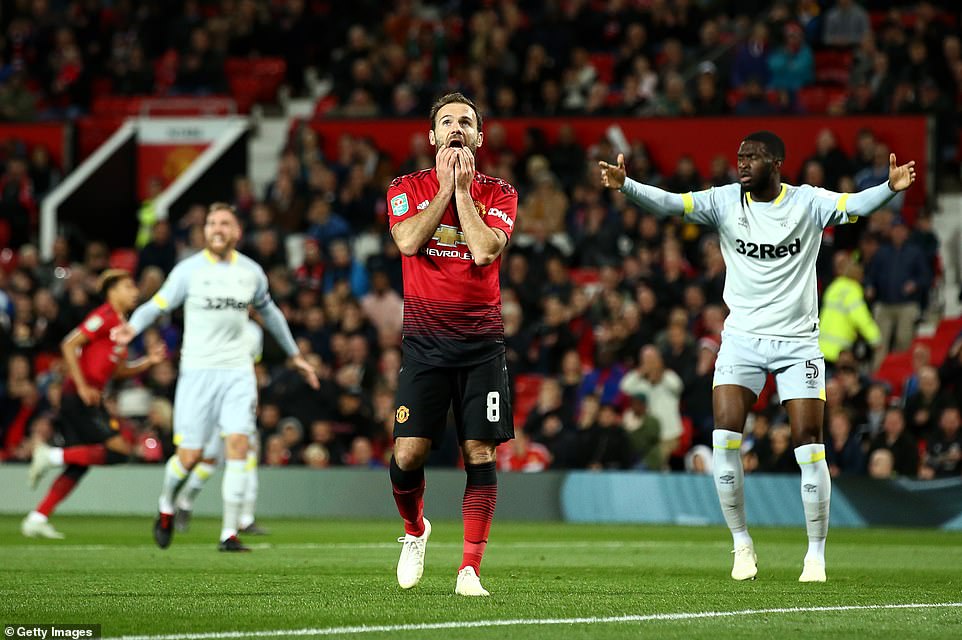 Lukaku hit the post and Grant then flung himself to the left to turn away a header from Florian Jozefroon.

But he was powerless to keep out Derby’s second goal in the 85th minute that left Old Trafford stunned.

Craig Forsyth got down the left and sent in a cross that reached Mason Mount on the edge of the box. His shot brought another fine save from Grant but he couldn’t quite keep out the follow-up as substitute Jack Marriott stole in from an onside position to head home.

Still United fought back. Marouane Fellaini dispossessed Bradley Johnson in injury-time and the ball was fed wide to Diogo Dalot on his home debut. His cross found Fellaini charging into the box and the Belgian buried his header past Carson.

So to penalties. It was tit for tat in front of the Stretford End as neither side blinked through 15 attempts.

Then Jones erred, Lampard celebrated and Mourinho headed for yet another inquest. 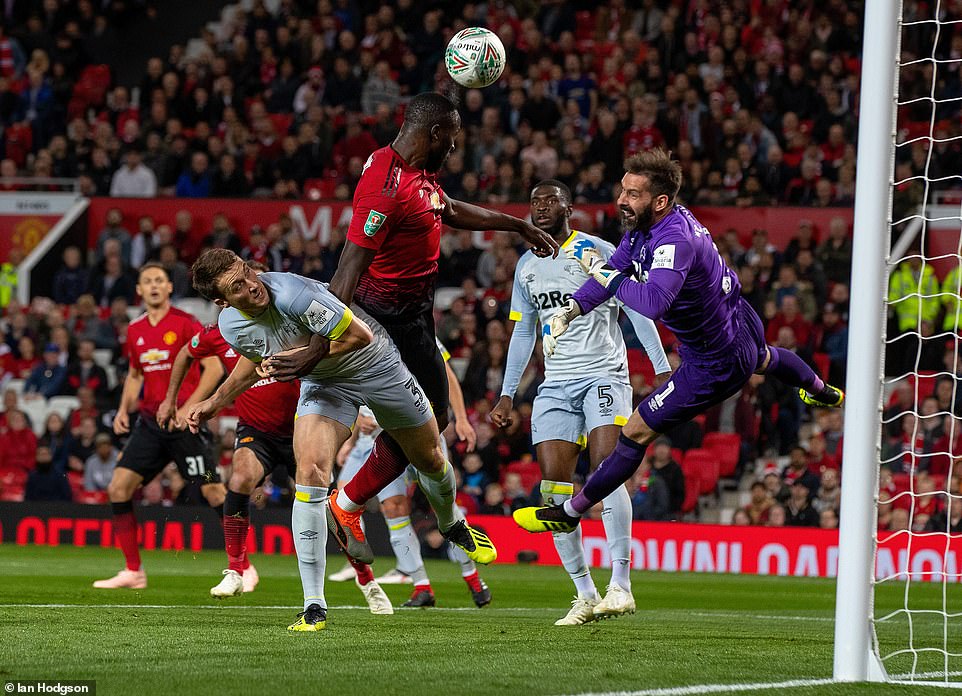 Yaya Toure accuses Pep Guardiola of having ‘problems with Africans’

Frank Lampard announces his retirement from football at 38

Batshuayi claims he was subjected to ‘monkey noises’ from Atalanta fans