Christian Eriksen laid on an attacking masterclass by scoring twice and setting up another as Tottenham cruised to a 3-0 victory over struggling Hull.

Eriksen was deployed in a deeper central midfield role at White Hart Lane and he could have completed his hat-trick in the second half had Hull goalkeeper David Marshall not pushed his bending free-kick onto the post.

Victor Wanyama, however, was on hand to slam home the rebound as Spurs secured their fourth win in 14 matches.

While Mauricio Pochettino’s men stay fifth in the table, Hull sit 19th and have now equalled the club’s top-flight record of six consecutive away defeats. 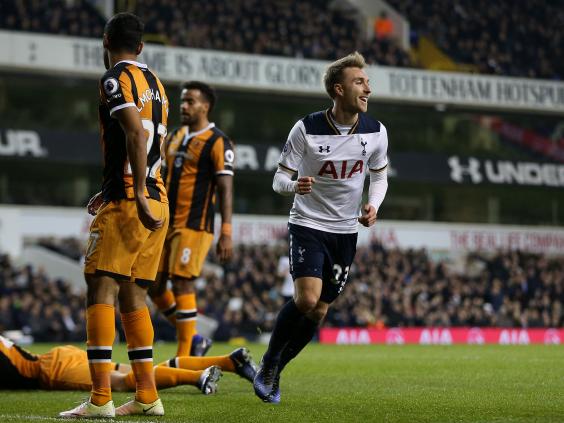 For all Tottenham’s difficulties in recent weeks, they now have four more points than at this stage last year and will be looking to capitalise on upcoming fixtures against Burnley, Southampton and Watford.

Pochettino has juggled his shape several times this season as he searches for the right blend but this was only the second time in the current campaign he has started with three at the back.

With Mousa Dembele out nursing a foot injury, Eric Dier and Wanyama were perhaps considered too cautious a pairing for a home game against Hull, so instead the more creative Eriksen dropped back and made up a 3-4-2-1.

Eriksen clearly thrived on the extra responsibility but it remains to be seen whether Pochettino feels he can play there against tougher opposition. 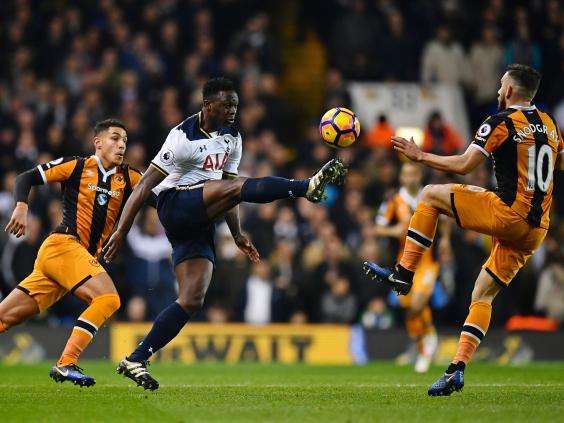 Victor Wanyama attempts to bring the ball under control (Getty)

The idea was presumably also to give Kyle Walker and Danny Rose, effectively playing here as wingers, more licence to attack and in the 14th minute it paid off, the latter a key component in Tottenham’s opening goal.

Jan Vertonghen’s chipped ball forward found Rose deep inside the penalty area and he capitalised on some feeble defending from Ahmed Elmohamady to tee up Eriksen, who smashed home his fourth goal in as many league games.

Tottenham were in cruise control with Moussa Sissoko particularly lively down the right, although Hull could have equalised when Andrew Robertson’s cross picked out Jake Livermore, who forced a low save from Hugo Lloris at the near post.

Spurs were jolted into life. Dele Alli should have scored when sent clear by Dier’s long ball forward, but he took too long over the shot, and then Hull’s Harry Maguire was fortunate not to concede a penalty as he misjudged a header and the ball struck his arm.

The home side were enjoying themselves, so much so that Vertonghen afforded himself a smile after he galloped forward and was only denied a superb goal by a trademark Michael Dawson block.

Despite their inferiority, however, Hull were still in touch and they enjoyed their best spell after half-time as Tottenham grew increasingly disjointed and careless in possession. 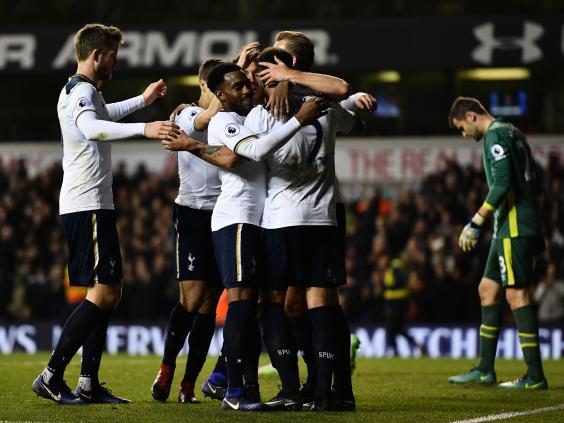 Livermore was again thwarted by Lloris after a Hull counter-attack saw the ball break to the midfielder, but his shot was diverted wide by the goalkeeper’s outstretched leg.

It felt like the visitors needed to take advantage and so it proved, as Spurs doubled their lead in the 63rd minute with almost a mirror image of their opener.

This time down the right flank, Dier played Walker in behind and he slid the ball to the back post where, again, Eriksen was waiting to tap into an open net.

Ten minutes later, Tottenham had a third. Eriksen came within a whisker of securing his hat-trick as his bending free-kick was pushed on to the post by Marshall but the ball cannoned back kindly for Wanyama to score his second goal of the season.

Pochettino instantly took off Harry Kane while Livermore and Robert Snodgrass were both withdrawn for Hull. Both managers knew the result was beyond doubt.